Why, as a contractor, should you care who owns the design?  Because it may affect your ability to use the design to build the project, build additions to an existing structure, reuse the design for another project, and to use photographs or other images of the design or structure you have built.

C.      Architect as Independent Contractor Not Subject to Work For Hire Doctrine

The AIA (American Institute of Architects) contract documents are construction form agreements that are widely used  for construction projects in California. Under the language of those agreements, the architect owns the design, not the project owner.  By hiring the architect and using AIA documents, the owner has only purchased the right to a limited use of the design documents to build that particular project, or for other purposes set out in the contract between the owner and the architect.  (See B101-2007, Sec. 7.2, 7.3; A201-2007 Sec. 1.5.1)

The AIA’s position on the architect retaining ownership of the construction design may be counter to the owner’s expectations.  The owner may believe it has purchased the design created by the architect, as well as the design documents for the project, when it bought and paid the architect for its design services.

The price an architect charges for design services may reflect the amount of use of the design.  Architects may also want to ensure that they have some control if the design is to be reused by some other party.  The architect created that design of a single use, for a certain parcel of land, and the design may not be suitable for other uses on other land.

B101, Section 9.1 expressly makes nonpayment of the architect a ground for the architect to suspend performance of services under the agreement.

Copyright law allows an author of ideas expressed in a fixed form to restrict use or duplication of the work, and a copyright is traditionally claimed by the owner of the work by putting a copyright notice on the work, usually a “C” in a circle, with the first year of distribution and name of the copyright holder.  This notice is no longer required, but is still seen on copyrighted works.  The architect may often have a copyright notice on his design documents.

There are some limitations on the copyright protection. It does not protect the functional features of a construction design, nor does it protect individual standard features, such as common windows and doors. Even if copyright exists in the design embodied in the structure, the owner of the copyright cannot prevent anyone from taking pictures of buildings so protected, if the buildings are ordinarily visible from a public place.  On the issue of infringement of the copyright of the structure itself, the statute states that the effective date of inclusion for protection of structures is December 1, 1990.

G.      Unauthorized Use of Construction Design

What if a contractor, subcontractor, or supplier wrongfully copies protected documents? This copying would infringe any statutory copyright, and may be a breach of contract if the contract specifically limits use of the construction design.

In Foad Consulting Group, Inc. v. Musil Govan Azzalino, 270 F.3d 821, 2001 U.S. App. LEXIS 23402  (9th Cir. Cal. 2001), the Ninth Circuit ruled that an engineering firm had granted an implied non-exclusive license to a developer to have a later architect use and modify the plans and drawings prepared by the original engineering firm.

The developer transferred its right to develop the project to another company, which retained a different architectural and engineering firm.  The new firm obtained copies of the revised plot plan, and other documents from the city.  Using these documents, the new firm prepared final site plans.  It had traced the original firm’s plot plan onto an overlay.

The original engineer claimed that the new developer had infringed on the plaintiff’s copyright in the revised plot plan by copying and modifying it, by filing it with the city, by circulating it among prospective tenants, and by using it to build the project.  The district court granted summary judgment to the developer, denying the plaintiff's claim.

The Ninth Circuit affirmed the trial court’s grant of summary judgment to the developer.   The Ninth Circuit held that the contract between the original developer and the original engineering firm impliedly granted the developer a license to use the plans to complete the project.  This license included the right to hire the second design firm to creative derivative works of the plaintiff’s work for the purpose of completing the project, and to publish the finished work.

The contract between the original developer and the original design firm called for the firm to create maps, drawings and plans for the project and to submit these documents to the city for approval.  The parties did not intend, and the contract did not specify, that the developer be required to obtain the design firm’s permission before using the plans to build the project.

The plaintiff argued that the copyright legend on the plans created an obligation on the part of the developer to obtain permission before using the plans.   The legend stated: All ideas, designs, arrangements, and plans indicated or represented by this drawing are owned by, and the property of the [firm] and were created, evolved and developed for use on, and in connection with the specified project.  None of such ideas, designs, arrangements or plans shall be used without written permission of the [firm].

The court held that the defendant developer did not exceed the scope of the license granted by the engineering firm by using the revised plot plan to create the final site plan, build the project, and publish the final site plan.

If an architect seeks to reuse the drawings to build a similar project that will diminish the value of the original project, there is no express provision in B101-2007 limiting the architect's reuse. However, obligations of good faith and fair dealing might prohibit the architect from reusing the design in any way that would substantially reduce the value of the original project.

J.        Use and Distribution of Design Documents During Project

During construction, a number of parties other than the owner and the architect will need access to the documents.  Issues which arise as a result of this need for access include questions as to:

A201-2007, Section 2.2.5 states that the contractor will be furnished one copy of the contract documents for purposes of making reproductions pursuant to Section 1.5.2.

A201-2007, Section 3.11.1, requires the contractor to maintain one copy of the Drawings, Specifications, Addenda, Change Orders, and other Modifications at the site for the owner. The sets must be in good order and marked currently to record changes. The sets are to be available to the architect, probably during working hours, and are to be delivered to the architect for submittal to the owner at completion

This article is not intended to be legal advice, and is only general information concerning the subject matter of the article.  Consult an attorney before taking any steps based on information contained in this article. 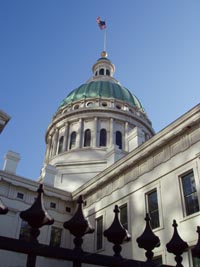